WARSAW, POLAND –Karolina Bielawska, 23, has won the latest Miss World competition held in San Juan, Puerto Rico.  A stunning and charismatic blonde, she is working towards a Master’s degree in management and engineering at the technological university in her hometown, the central city of Łódź. Eventually she hopes to earn a PhD.

The Polish Miss World eclipsed US contestant Shree Saina, the first runner-up, and second runner-up, Olivia Yace, of Africa’s Ivory Coast. Originally scheduled for last December, the pageant was postponed over pandemic concerns.  This was the second time a Polish finalist won the Miss World crown. The first was Aneta Kręglicka back in 1989, the year of Poland’s second 20th re-emergene as a free country.

Apart from her academic pursuits, Karolina has done modeling, enjoys playing tennis and is a volunteer aiding her city’s homeless community. ”Greatness is measured by one’s courage and heart,” is the new Miss World’s motto. ”Less important is what one achieves or possesses than how one behaves,” Karolina explained.

This year, the pageant’s glitzy as always finale included gestures of solidarity with the Ukrainian nation, now bravely resisting Russian dictator Putin’s terrorist invaders. In a tribute to the embattled Ukrainians, the finalists processed across the stage holding lighted candles. Candles also flickered in the audience as Jamaica’s Toni-Ann Singh, the 2019 Miss World, sang Céline Dion and Andrea Bocelli’s  ”The Prayer.” 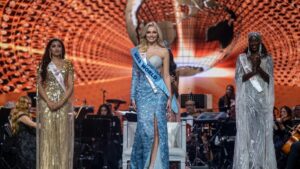