Felician claimed the first win via shutout and the first victory in a true road game in the seven-year history of its program. The Golden Falcons’ only triumph away from home prior to Tuesday came at a neutral site earlier this season against the University of the District of Columbia. The Golden Falcons (3-11, 2-6 CACC) extended their school records for both overall and conference wins in a season. 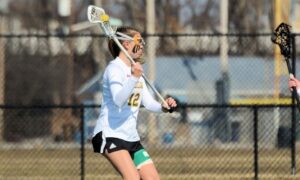 Kelty converted a free-position attempt 36 seconds into the action. But the 1-0 score held for the next 11 minutes until Ramirez found the cage. Marzooq sparked the visitors by beating the first period buzzer with a goal, and Felician racked up five second-quarter markers for an 8-0 halftime lead. Felician scored four times during the third period, forcing running time by taking a 10-0 edge at the 12:20 mark, and picked up three four-quarter scores for the final margin.

Felician concludes its season by hosting Georgian Court University on Saturday at 1 p.m. at Paramus Catholic High School. Esposito will be honored in a pregame Senior Day ceremony.