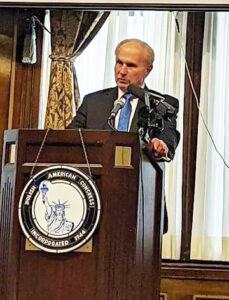 In May, President Spula (in photo) met with United States Ambassador Mark Brzezinski in Warsaw.  The Ambassador accepted with great pleasure President Spula’s invitation to meet with community leaders in Chicago, and to deliver a speech on how Russia’s brutal war against Ukraine affects American foreign policy-making.

The event began with President Spula’s warm welcome to the excellencies, the elected officials, the community leaders, the candidates for office, and ladies and gentlemen,  before he introduced Ambassador Mark Brzezinski.  Please see the below link to watch President Spula’s speech.

Only a call from the President summoning me to the White House could keep me away from meeting with the Polish American Congress in Chicago, said the Ambassador.  My sister, my brother, and I are grateful to the Polish American community. Poland and the Poles once again are playing a key role in world affairs with the United States, and this shows that:  America and Poland are partners in freedom.  The Ambassador’s speech described  four specific policies that are strengthening the bilateral relationship between Poland and the United States in the context of Russia’s imperialist war of aggression against Ukraine.

First, the Ambassador reported that the hospitality, unprecedented in world history, recently shown by the Polish people, who have taken into their homes approximately three-and-a half -million Ukrainian women and children, inspired President Biden, who wondered why Poles are doing so much.  Ambassador Brzezinski said that he told the President that: Poles see today’s Ukrainians, victimized by a cruel Kremlin oppressor, like their forebears who were brutalized by Hitler’s Germany in September 1939, when Poland decided to fight rather than submit to Nazi Germany.

Second, Ambassador Brzezinski underlined that today Poland is a front-line state facing a revanchist Russia intent on occupying the former Soviet space.  Today, 12, 600 United States armed forces personnel are in Poland.  The Ambassador described Poland’s massive 20  billion dollars defense project to purchase expensive American made state-of-the-art equipment. In his introductory remarks, President Spula said that the Polish American Congress, as a member organization of the Washington, D.C. based Central and East European Coalition (CEEC), is working hard to get deep discounts for Poland and the other CEEC countries. For example, Boeing’s Apache Echo Class Helicopter is very expensive, because it has the latest equipment for early target acquisition.  Poland needs this helicopter to relay target location information long distances to missile and artillery batteries in order to stop a Russian invasion of the Suwalki Corridor.

Third, the money raised by the Polish diaspora to help Ukraine favorably has impressed American policy-makers who need to see public support for Ukraine and the Ukrainians as Russia continues its savage war.  The Polish American Congress’s successful RADIOTHON was among the fund raising efforts for Ukraine organized by Polish American organizations.

Finally, the Ambassador noted that Poland’s economy is expected to grow by 4% and that he has been inviting the CEOs of American companies to set up operations in Poland.  He also has been working on enlarging the scope of educational exchange programs with an emphasis on getting more young Poles to study at top American research universities.

Ambassador Brzezinski mentioned that his grandfather Tadeusz, who was a rising star in the Second Polish Republic’s Ministry of Foreign Affairs was obliged to sell insurance door-to-door after the communist seizure of power in Poland toward the end of World War II.  He continued by  saying that: “My father Zbigniew lived the American dream.” This shows continuity over three generations.  Now we Polish Americans have an Ambassador in Warsaw of whom we are very proud because he will strengthen the bilateral relationship between our two countries.  Ambassador Mark Brzezinski knows that America and Poland have been partners in freedom since their democratic revolutions at the end of the eighteenth century.  The present context marked by Kremlin aggression against Ukraine will only strengthen our longstanding country-to-country and people-to-people partnership in freedom.