NEW JERSEY – “The Wanderer” made its theatrical debut recently at the iconic Tony Award Best Regional Theater in America Paper Mill Playhouse in Millburn, NJ. In the 12 years that I have been reviewing shows, this production will surely be headed to sell-out crowds on the Great White Way. 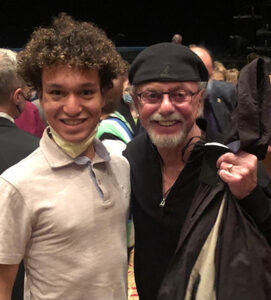 The Wanderer depicts the life and music of Dion DiMucci.  My son James Adam was lucky enough to chat with Dion from the Bronx during the intermission at the play’s debut in Millburn. (In photo: Jad Dombrowski and Dion)

As I’ve mentioned many times over the years, if you enjoy the theatre, and want to avoid the costly tolls and exorbitant parking rates, then The Paper Mill will never let you down.