BALTIMORE, Md. — The Polonia of greater-Baltimore was graced with a visit of diplomats from Poland’s Ministry of Foreign Affairs here on February 6, 2022. The delegation was comprised of Marcin Przydacz – Undersecretary of State for Security, The Americas, Asia, and Eastern Policy; Deputy Directors Maciej Dazuta, Tomasz Orłowski and Stanislaw Peltz. Also in the entourage were Second Secretary Monika Kniewska – Chief of Protocol, and Mrs. Anna Magierowska. 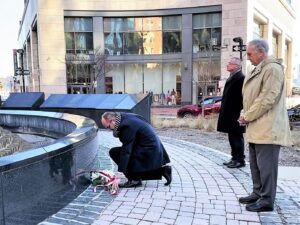 PHOTO: Honoring the Katyń Martyrs. Undersecretary of State Marcin Przydacz is depicted laying a floral wreath, and properly adjusting its ribbons, at the base of the National Katyń Memorial. Participating in the ceremony is Ambassador Marek Magierowski (left) and Honorary Consul Richard P. Poremski (right).

Earlier in the week the visiting foreign affairs diplomats were part of a larger delegation, led by Foreign Minister Zbigniew Rau, on a three-days mission to Washington, D.C., primarily to attend a conclave of the Organization for Security and Co-operation in Europe – OSCE. Minister Rau is currently the Chairman-in-Office of the OSCE. The minster and his delegation members also met with Anthony Blinken – U.S. Secretary of State, and with relevant members of the U.S. House of Representative and the Senate. 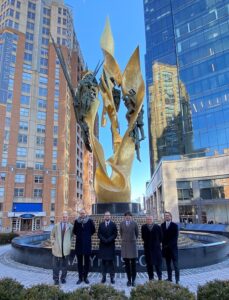 For the Baltimore visit, Undersecretary Przydacz specially requested a personal meeting with its Polonia. The delegation attended the 10:30 a.m. Polish Mass at Holy Rosary Church. Afterwards, the diplomats were honored to a coffee and cake reception in the undercroft hall of the church. Przydacz addressed over 100 persons that were in attendance. His various remarks focused on the importance and necessity of a strong, growing, active, and pro-Poland Polonia were very well received by the audience. He and the delegation members then intermingled and held personal conversations with those in attendance for one hour.

A small private luncheon was opted for the delegation by the undersecretary. Attending were three invited officers of the Polish National Alliance (PNA) Council 21: Richard P. Poremski – President; Malgorzata Bondyra – Vice President; and Michael Carnahan – Financial Officer/Auditor. The lively conversation centered on the importance of the PNA being the Polish epicenter of the greater-Baltimore area that provides a constant plethora of Polish/Poland relevant educational programs and cultural events. It was emphasized that the PNA includes a large meeting hall, language and cooking classes, a children’s folklore dance group, an extensive library, the traditional observance and celebration of Polish holidays, etc., and a convivial bar and lounge.

It was also proudly noted that the expansive PNA Building now houses the newly established Consulate of the Republic of Poland, in Maryland, with Honorary Consul Richard P. Poremski presiding.  The undersecretary, deputy directors, and ambassador were all very pleased and much impressed with the PNA being so extensively invested in the Polish diaspora and the City of Baltimore. 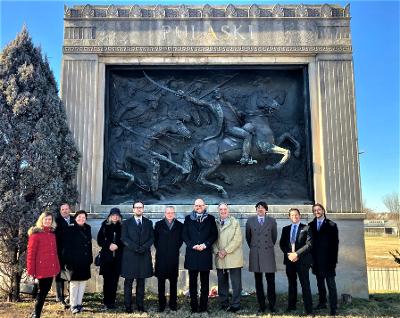 The delegation then visited the striking 2-stories-tall bas relief General Casimir Pułaski Monument in Patterson Park, and the dynamic National Katyn Memorial in Harbor East. Ceremonial decorum, with floral wreaths presented, was observed at both monuments. The National Katyń Memorial Foundation, in a surprise gesture, invested Undersecretary Przydacz with Honorary Membership in the Foundation, that included a framed proclamation and obligatory Katyń armband, for which he was very thankful. As they departed for Washington, the diplomats proclaimed their aside to Baltimore to be a huge success, with much heartfelt appreciation expressed.