At a time when the Slavic peoples inhabiting the areas that form Poland today were heathens, their lore and beliefs caused them to practice old ceremonies that were meant to avert misfortune and make nature treat them with goodness. Among their many rites and customs were periodic holidays observed to mark the changing climate during the year. For example, they used to celebrate winter, the onset of spring, and the onset of summer with their vegetation cycle and the progress of animal husbandry. 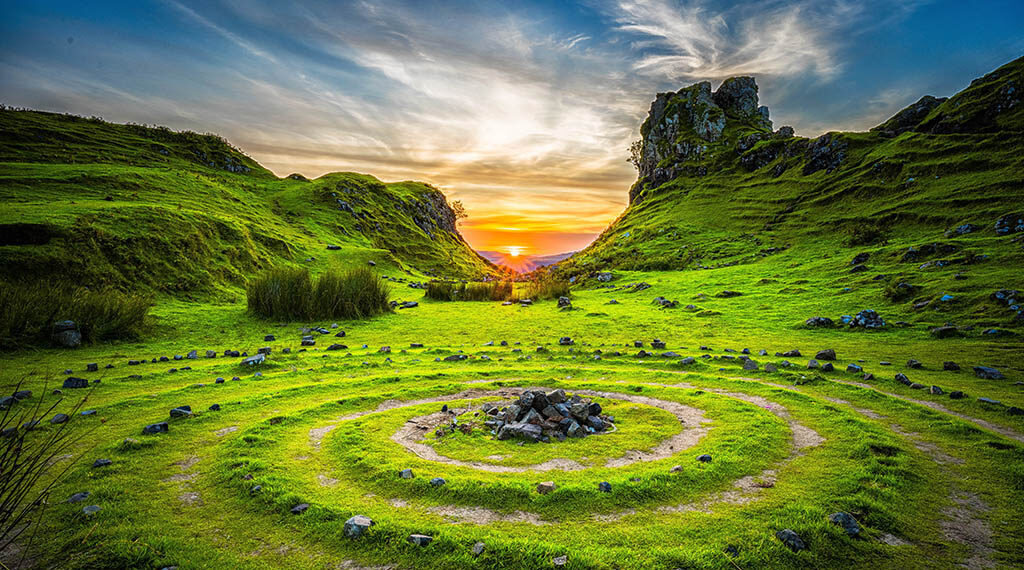 The old lore and rites were gradually eliminated with the advancing enlightenment of the people. Nonetheless, they are an important source of knowledge about the origins of Polish folk culture.

For example, a series of solemn ceremonies were associated with their winter period between Christmas and the Twelfth Night. One was farming, documented by the presence of bundles of straw in the corners of the main room, hay put under the tablecloth, the flinging of corn seed against the ceiling, or the stringing of fruit trees with the straw or hay from the Christmas table. Another was the honoring of the dead where during the festive supper on Christmas Eve, one place at the table being left available to the dead.

Other rites dealt with mysterious magic and the subject of prospective wedlock, or the yields at harvest time, or success in personal matters. One rite we are familiar with is when the children and youngsters dressed as various monsters in masks engaged in wandering from cottage to cottage and were offered various dainties at every door.

The fancy dressed and colorful decorations associated with these ceremonies were always a welcome diversion not only for the eye tired of the monotonous winter scene of the countryside. After all, this was a period when farmers had relatively more time to spare than in any other of the four seasons.

In line with the brief discussion on Polish folklore, I thought it appropo that I relate to you the story about the Heathen Deity of Wolin, a being called Swiatowid — possibly the source of these old rites.

The island of Wolin in the mouth of the Odra River, on the Baltic, is the site of intensive excavation work conducted there for many years by the Szczecin Archeology Laboratory of the Polish Academy of Sciences Institute of the History of Material Culture. In 1974, the excavation site yielded a sensational find — the four-faced effigy of the Slavs’ deity facing all four quarters of the globe. The figure, measuring less than four inches in height, dates back to the late 9th century A.D. Scientists were unanimous in acclaiming the little statue as the greatest archeological find of the post-war period.

It was back in 1848 that the first such figure was found in the Zbrucz River, on what was then the boundary between Russia and Austria. Lacking any documentation, it has continued to perplex scientists to this day. Still, there are some written records from the 12th century that mention a four-face deity (called Swiatowid in Polish) worshipped in Arcona on the Baltic-coast island now known as Ruggen. But since this and similar finds were located back in the 12th century, some researchers thought it likely that all these deities were side-effects of Christian influences. The pre-Christian Slavs were denied to possess any spiritual culture of their own.

The discovery of the four-faced effigy of Wolin dating from the second half of the 9th century, together with the results of investigations at Arcona, demonstrated the presence of a full-fledged culture in the 8th century already, and made it clear that at that time the western Slavs had worshipped the four-faced god.

As a curiosity, let us mention that evidence has been found of the Danish King Swen delivering his sacrifice to the four-faced deity — which speaks of the broad distribution of the cult in the Baltic basin.

The latest discoveries made in the German Democratic Republic have yielded firm evidence that the Slavs had deities of their own as represented by carved statues. One example is the finds at Alt-Friesach, district of Neuruppin, where the dating was established by the reliable method of radioactive carbon.

It is against this background that the latest find of Wolin must be seen as the crowning piece of evidence illustrating the Slav’s spiritual culture in past ages. It’s importance is enhanced by the fact that the figurine was discovered in a house located within an urban compound, which testifies to the domestic nature of the deity and the universality of the cult in those early ages.

The island of Wolin and the excavation site there is in fact an invaluable source of evidence of our Slavic ancestors. Archeologists there have been able to locate the site of the pagan temple of Wolin. The Wolin site is a true pearl of Polish archeology and its discoveries may easily modify existing views on the culture, customs, lore, and magic of the old Slavs. Wolin has yielded many valuable finds… among them, the gilded figure of a horse wide saddle dating from the 11th century, and skulls and foundation wreaths put under newly built houses (from the 10th and 11th centuries) — both of a magic character.