Baltimore, Md. – Despite the overcast, chilly and very blustery weather here on April 3, 2022, approximately 150 people congregated around the National Katyn Memorial for the 22nd Annual Remembrance after a two years absence at the Memorial site due to COVID-19 pandemic restrictions. They came to honor and solemnly remember the 22,000 Polish military officers, and the inclusive national leadership of Poland, murdered during the spring of 1940 in the Katyń Forest at the brutal hands of the Soviet Union’s (aka Russian) NKVD militarized political police. Besides Katyń Forest, this genocide was also simultaneously carried out at other known locations in Russia that collectively included Mednoe, Kharkov, Starobelsk and Ostashkov during the second year of World War II. 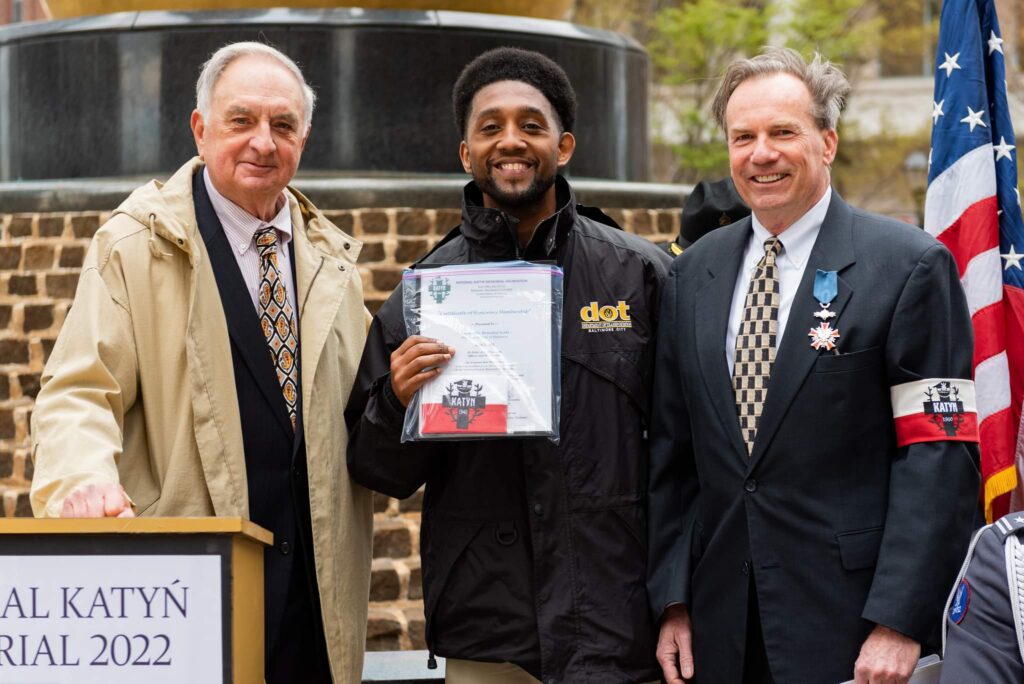 This Katyn Remembrance was organized by the National Katyń Memorial Foundation, under the auspices of Chairman Richard Poremski, in cooperation with the Embassy of the Republic of Poland. The ceremonies and participants included color guards from the Polish Legion of American Veterans (PLAV) – Department of Maryland, the Polish Army Veterans Association of America (SWAP) Post 81 – New Jersey, Catholic clergy (RC, PNCC), diplomats, guest speakers, politicians, military officers and Polish folk groups. It closed with the laying of wreaths and the playing of “Taps” by a PLAV bugler.

A déjà vu thread running through all of the speeches expressed the stark similarity of the Russian invasion and unconscionable brutal aggression happening right now in Ukraine, via-á-vis Poland in World War II – with the Katyń Massacre being just one horrific example of extreme modus operandi-Russian cruelty.

All the of speeches presented were pertinent and well delivered; following are just a few edited notable excerpts:

Mayor Scott: “The Katyn Monument is for everyone in Baltimore City. It is a symbol of unity that unites us all to always resist hatred and malevolence.”

He also opined on the how the various ethnic groups strengthen and enhance the fabric of the city, making it stronger and more diverse to everyone’s benefit.

Congressman Sarbanes: Focused on the Ukraine tragedy, said that he is confident that the United States and Congress will actively support the defense of Ukraine against Russian aggression, and that Congress just passed legislation to provide billions of dollars in aid to the embattled and beleaguered country. 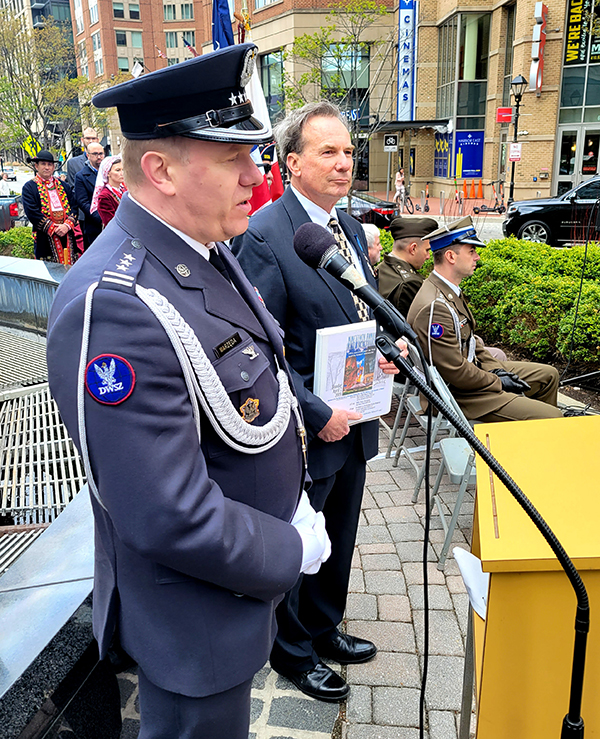 Colonel Marzęda: Gave an overview of Poland’s military participation and contributions on all of the world-wide allied battle fronts in WWII. He said that the Katyń Massacre was pent-up Russian revenge for the resounding defeat of the invading Red Army at the very gates of Warsaw in 1920 – “The Miracle on the Vistula.” The colonel ended his remarks with the patriotic Motto of Poland’s Armed Forces: “Za Życiem i Broniᶕ’ – ‘With Life and Arms.”

Consul General Krystek: Read a letter from Ambassador Marek Magierowski that stated he was unable to attend the Katyń Remembrance “due to obligations in coordinating Poland’s response to the present humanitarian crisis on our border with Ukraine.” The ambassador recounted the tragic and horrific details of the extended Katyń Massacre and its genocidal effect suffered on Poland by the Russians. He thanked the Nation Katyń Memorial Foundation for “continuing to hand the mantle of historic remembrance to future generations for over the past 20 years.”

Earlier in the day a Katyń-dedicated mass was celebrated at Holy Rosary RC Church in Polish and English. At the afternoon Katyń reception in the Great Hall of the Polish National Alliance the 96 victims of the April 10, 2010 catastrophic Smolensk-Katyń airplane crash were honored with a candle lighting ceremony and eulogy. The crash claimed the lives of Poland’s President Lech Kaczynski, his wife Maria, the Chiefs of the Polish Armed Forces, esteemed clergy, prominent government officials, notable institutional leaders and honored citizens.

The eminent and distinguished entourage was enroute to the Katyń Forest to pay homage to the slain sons of Poland on the 70th Anniversary of the Katyn Massacre. They all have now have become an indelible and paramount element in Poland’s collective Katyń memory.

On this reflective spring Sunday all who perished because of Katyń were commemorated … those in April 1940 by the hand of Josef Stalin’s Soviet Union … and more recently those by the capriccios Hand of Fate on April 10, 2010.