The Kosciuszko Foundation is proud to announce the three laureates of the 18th competition for the Witold Lipski Awards, recognizing young Polish scientists for their outstanding advances in computer science. Dr. Filip Mazowiecki of the University of Warsaw was awarded the Prize in the category of theoretical aspects of computer science, and the winners of two equal Prizes in the category of computer science applications were Dr. Michal Koziarski of the Wroclaw University of Technology and Dr. Mateusz Ostaszewski of the Warsaw University of Technology. During the award ceremony held on October 12, 2022, at Warsaw University, in Poland, Prof. Leszek Pacholski, Chairman of the independent Jury, and Marek Skulimowski, President and Executive Director of the Kosciuszko Foundation, which organized this year’s competition, presented the winners with prizes totaling PLN 100,000 (ca. $20,000).

The Award was created in 2005 to honor the memory of Dr. Witold Lipski (1949-1985), prematurely deceased at the age of 35, a pioneer of Polish computer science. It is considered the most prestigious distinction awarded to young computer science specialists in Poland nowadays.

“Witold Lipski was a world-class computer scientist with lasting achievements in database theory, computational geometry, and algorithm theory. The award in his name is intended to inspire young adepts of computer science and to promote the development of this branch of science in Poland,” said Prof. Miroslaw Truszczynski, Chairman of the Award Committee.

“One can learn a lot from such Legends as Witold Lipski. He was a James Dean of Polish computer science; young, extremely talented, go-getter and charismatic; he lived without barriers and left significant achievements and impressive legacy,” added Dr. Celina Imielinska, co-founder of Art Data Laboratories, Award Committee Secretary.

“I am very honored to receive the Lipski Award. It is a big distinction to join the list of laureates, which consists of Polish computer scientists who are top researchers in the international arena. I think that the Award will gain recognition for my area of research, formal verification, which I believe is an important field,” said Dr. Filip Mazowiecki.

The competition for the Award is organized annually; it is addressed to scientists who are under 35 years of age, who have Polish citizenship, and who permanently reside in Poland.

In December 2021, the Foundation for the Information Technology Development (FITD), which had served as the competition organizer, handed this role over to the Kosciuszko Foundation. Furthermore, thanks to the generosity of a private donor from the United States, starting in 2022, the Award is presented in two categories: for achievements in the theoretical aspects of computer science and in computer science applications, with the monetary value of PLN 50,000 (ca. $10,000) in each category.

“This year, we had a record number of candidates. The winners stood out clearly, but there were at least three other people who deserved the recognition. This indicates a good level of computer science in Poland,” said Prof. Pacholski.

The award was created on the initiative of Polish computer science specialists living abroad: Professors Krzysztof Apt, Wiktor Marek, and Miroslaw Truszczynski. Financed by individuals, scientists, The Polish Information Processing Society, and companies operating in Poland, such as Sage (2006-2015), Atende (2016-2021), and Huawei (2020-2021), the Award has served as a platform for cooperation between the worlds of science and business.

This year’s award ceremony was attended by eminent scientists, including Prof. Piotr Sankowski, the Award’s first laureate, currently the President of IDEAS NCBR, and Prof. Pawel Strzelecki, the Dean of the Faculty of Mathematics, Informatics, and Mechanics of the University of Warsaw, who hosted the event. Present were also members of the family of the late Dr. Witold Lipski, including his brother Maciej Lipski, and children Dr. Kasia Lipska and Dr. Witold Lipski, Jr., who shared their memories. Prof. Tomasz Imielinski of Rutgers University joined the event virtually and also contributed his reminiscence of Dr. Witold Lipski, his Ph.D. advisor, colleague, friend, and extraordinary scientist.  Kosciuszko Foundation President Marek Skulimowski thanked the FDCS for organizing the competition in the past years and announced taking the helm of this initiative in the future. In conclusion of the event, the laureates gave brief lectures summarizing their scientific achievements. 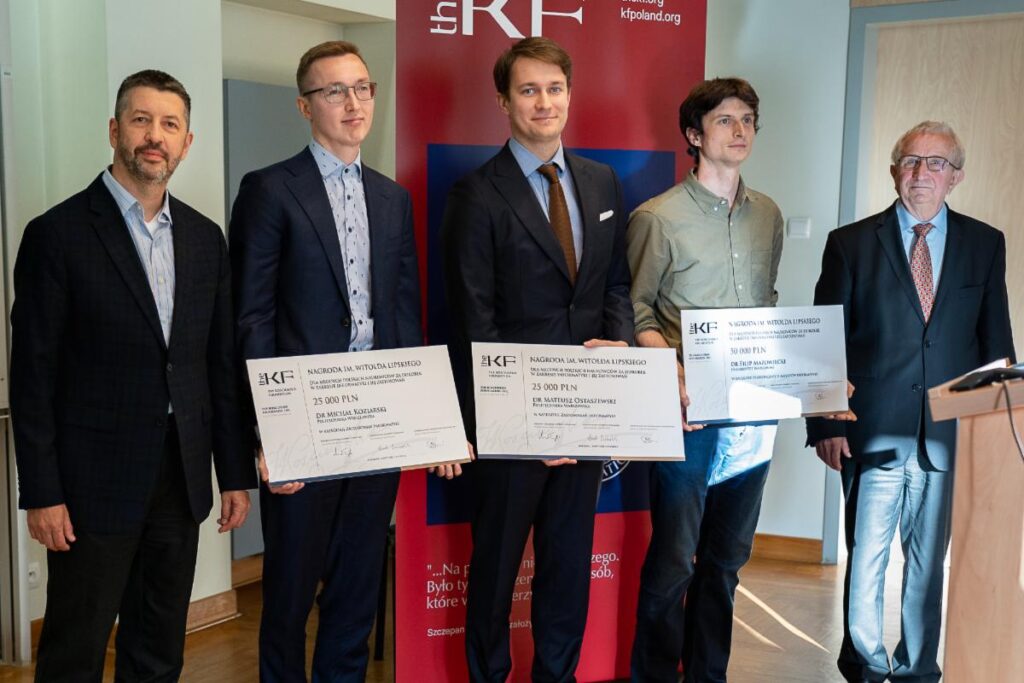 Information about the Laureates of the 2022 Witold Lipski Awards:

Michał Koziarski, a laureate in the field of computer science applications, defended his thesis on the imbalanced data preprocessing algorithms in the classification task at AGH University of Science and Technology in 2021. Currently he conducts research on multi-objective classification algorithms at Wrocław University of Science and Technology, where he previously obtained his master’s degree. In addition to his theoretical research on machine learning algorithms, Michał Koziarski also participated in research and development projects focused on cancer detection from histopathological scans, and creating summaries of large image datasets. He is particularly interested in using the methods of artificial intelligence in medicine and life science domains, and is working on applying machine learning to drug discovery. Recipient of a stipend for exceptional young scientists awarded by Polish Ministry of Science and Education in 2020, and distinction by Polish Artificial Intelligence Society in the award for the best PhD dissertation in 2021. Principal investigator in a PRELUDIUM research grant on imbalanced image classification algorithms in years 2018 – 2021.

Filip Mazowiecki, a laureate in the field of theoretical aspects of computer science, defended his doctoral thesis on logics related to database theory at the University of Warsaw. For most of the last year of his Ph.D., he went on a research visit to the Pontifical Catholic University of Chile, where he started working in a new area: formal verification. He spent almost four years as a postdoc at the Universities of Warwick, Oxford, and Bordeaux. In September 2019, he got the position of a research group leader at the Max Planck Institute for Software Systems in Saarbrücken. In February 2022, he came back to the University of Warsaw, where he received the position of an Eilenber adiunkt. Dr. Mazowiecki worked on determining the complexity and charting the decidability frontier for classical decision problems for query languages. Specifically, his study was related to satisfiability and containment problems of two languages: the two-variable fragment of first-order logic, and datalog programs. Later, he started working in the area of formal verification, the study of verifying the correct functioning of systems. He worked on two models. First, Petri nets, where he was involved in the recent progress on the complexity of reachability and soundness problems. These are theoretical results motivated by applications of Petri nets in the modeling and analysis of software, business processes, and others. Second, weighted automata, where he mostly worked on expressiveness and decision problems. These results had a theoretical impact on related models like recursive sequences, probabilistic automata, and cost-register automata.

Mateusz Ostaszewski, a laureate in the field of computer science applications, received his Ph.D. with honors at the Institute of Theoretical and Applied Informatics, Polish Academy of Sciences in Gliwice, under the joint supervision of dr hab. Jarosław Adam Miszczak and Dr. Przemysław Sadowski. While preparing his doctoral dissertation, he collaborated with Professor Leonardo Banchi and completed a research internship at UCL with Professor Simone Severini. Following his Ph.D., he started cooperation with a research group led by Professor Vedran Dunjko (Leiden University). Currently, he is a postdoctoral fellow at the Warsaw University of Technology. Dr. Ostaszewski was a laureate of the Minister of Science and Higher Education scholarship for outstanding achievements and the Etiuda doctoral scholarship. Moreover, he participated in projects financed by the National Science Center and the Foundation for Polish Science. His research results were presented, among others, at the prestigious NeurIPS conference and published in journals such as Quantum, Computer Physics Communications, or Journal of Physics A: Mathematical and Theoretical. Currently, his research focuses on the problem of continual learning. In addition, he is also involved in utilizing deep learning techniques for quantum circuit construction that meet the limitations of currently built quantum devices.