NEW CASTLE, Del. – Sophomore right-hander Aniesa Grabowski (Childs, Pa./Lakeland Regional) was the top individual finisher for the Felician University women’s bowling team at the Northeast Roundup, hosted by Wilmington (Del.) University on Saturday and Sunday at Bowlerama. The event was Felician’s final one of the regular season. 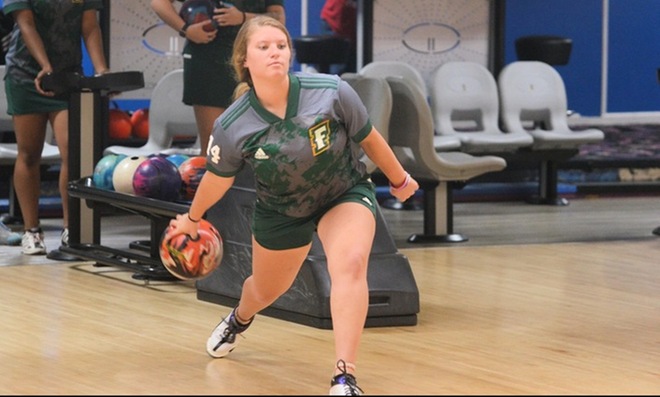 Sixty-one bowlers started at least one match during Saturday’s traditional play. Of those, Grabowski placed 14th. She started all five matches and totaled 951 pins for an average of 190.2. Grabowski began her weekend with a 240 game during the Golden Falcons’ loss to No. 13 nationally-ranked Fairleigh Dickinson University.

Felician sat in eighth place after Day 1, but fell to ninth after Saturday’s first three Baker matches. The Golden Falcons then defeated Chestnut Hill College, 931-903, in the position round to hold onto ninth place.

Felician was a streaky 4-5 during its dual matches over the weekend. The Golden Falcons drew FDU and No. 25 Adelphi University to start the weekend, dropping both, but then claimed victories in their final three traditional matches on Saturday. Felician then dropped its first three Baker contests on Sunday prior to the position round.

Senior Natalie Swindell (Beachwood, N.J./Toms River South) finished Saturday with a 235 game to shoot 919 for five matches and place 22nd. Freshman Sandra Hornor (Brick, N.J./Brick Memorial) fired an 899 and was 27th. The Golden Falcons bowled to an all-event per-game average of 175.2 for the weekend.

FDU won the tournament, defeating Mercyhurst University, 1015-969, in the championship match. The Knights went 9-0 for the event.

Felician is slated to compete in the 2022 East Coast Conference Championship tournament on Mar. 25-27 in Coram, N.Y. Due to the COVID-19 public health crisis, the Golden Falcons will take part in the conference championship event for the first time since 2019. Felician concludes the regular season with a dual-match won-lost record of 52-64, including 33-36 during the spring semester.