Skip to content
Greetings: The article below, with all the quotes about how to receive Communion got me thinking and I just had to Rant a bit about it all.  This might seem like a “small matter” and even an unimportant matter to many people….. and if it does….. it is because they either are taking Jesus for granted….. OR….. because their faith is not complete, their understanding is watered down, and their real knowledge of an awesome Truth is very much lacking!
Because of the unnatural fear and hypochondria over a germ, the bishops decided that Communion in the hand would be “safer”.… BUT….. I notice that every time I gave Holy Communion in the hand, I could not help but touch EVERY single person! People automatically raise their hands and close their hands as they receive, and it is unavoidable that I would touch them, and they would touch me!! I always wondered that no one seemed to notice but it was still a fact! It was inevitable that the priest giving Holy Communion in the hand, can not help but touch every sweaty hand!
However,…. I rarely, if ever, touched anyone when I gave Holy Communion on the tongue…. especially if they were kneeling! The ancient tradition was actually safer…. as well as more reverent, meaningful, and humble!
If you think about it….. the Church, guided by the Holy Spirit, has been giving Holy Communion on the tongue for centuries…. because it was reverent AND safe! It is also a “a holy and symbolic action” that strongly teaches a profound and awesome Truth: “I am about to receive Our Lord, God almighty, Jesus my Saviour!!!!…… I kneel in humility, reverence, love, and adoration and HE graciously and lovingly COMES to me!….. I do not grab Him!”
The sad novelty of Communion in the hand is just that…. a novelty!  An interesting FACT is that this “novelty” was actually forced on us by liturgists who had an agenda.  They lied to Pope Paul VI, who, with regrets, only gave his limited, and unwilling permission, because he was told it had become a universal custom and that the people were demanding it! As he reluctantly gave in to the demands of liturgists he said, “This method (on the togue) must be retained.”
It is by small things – symbols, images, actions, and so on, that we learn and understand….. Communion in the hand has taught us a very negative lesson.  It has made it more difficult for many people to grasp the awesome doctrine and miracle of the Most Blessed Sacrament and faith of many has been diminished.  Holy Communion is NOT mere food or a simple symbol!!! Holy Communion is the actual, living and true Body and Blood of Jesus Christ.  He whom the Heavens cannot contain, in His great love for us, comes willingly into our little hearts!  He becomes and IS the Bread of Life that we receive at the Most Holy Sacrifice of the Mass!!! An awesome miracle of love that echoes through the centuries from the Last Supper to every Catholic Mass!!
Read The 6th chapter of the Gospel of St. John!  In it, Jesus lays out His plan to be with us, and to strengthen us, and nourish us.  He tells the crowd that He is the literal, actual and true Bread of Life and that His “Body is true food and His Blood is true drink!” He is not being “poetic” or merely talking about “symbols!” He does not back down when most of the crowd leaves Him!  He insists that He is the Bread of Life and only with THIS miraculous and supernatural food will we have Eternal Life!!!! Then, at the Last Supper, He gives us the great miracle that would echo from that instant, through the centuries, and through every Roman Catholic Mass, to our present day and age, and to every Catholic Church!!!!
I remember talking with a Protestant minister once and when I described what Catholics have believed about Holy Communion, from the time of Jesus to this very day…. he said that if he believed that he could not enter a Catholic Church and approach the tabernacle unless he actually crawled in humility….. because he would not feel worthy to stand in the presence of Jesus!!! I always remember that…. and it reminds me of the overwhelming privilege we Catholics have….. to be in the actual, and living, and true, and loving presence of Jesus Christ Himself in every Catholic Church!!!
Note the article below: God bless you, Fr. Charles 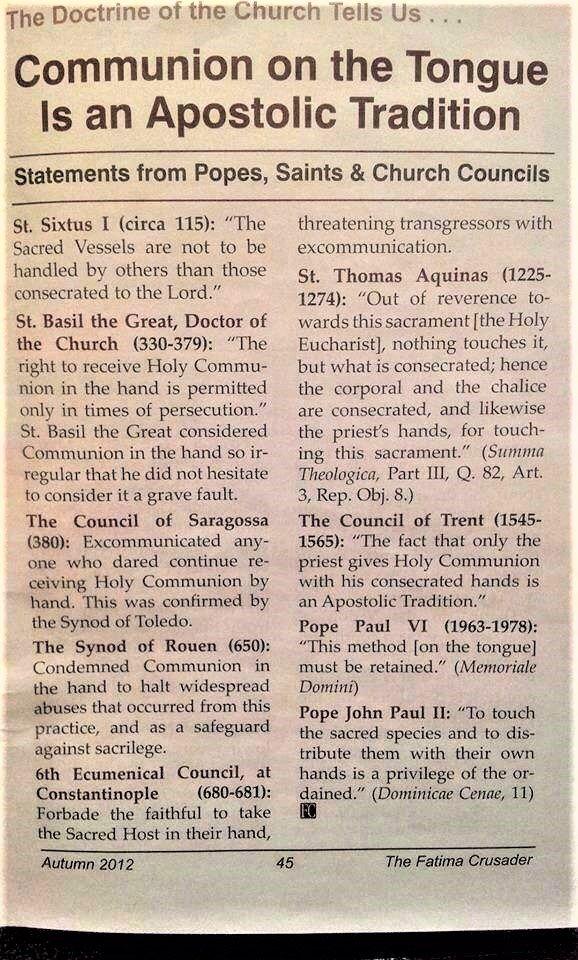