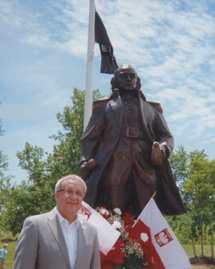 NEW JERSEY – Today, 42 languages are spoken in Garfield, New Jersey. Garfield proudly proclaims that it is “the City of Champions”, an allusion to the prowess of its athletes, especially football players. Gone are the days when the City of Garfield largely was populated by Italian Americans, whose forebears emigrated from Southern Italy, and who lived on the heights east of Midland Avenue, and by Polish Americans, who came from Southern Poland, and lived along the lowlands on the east bank of the Passaic River.

In photo: Mr. Bogdan Chmielewski, CEO of the Polish and Slavic Federal Credit Union, which is a leadership level contributor to the Statue of General Pułaski.

The need to promote a sense of shared commitment to democratic values and civic virtues among Garfield’s diverse populations explains why the city’s officials, civic, and religious leaders decided to launch Garfield Community Days this year. The first edition of Garfield Community Days began with an evening event on 20 June at Belmont Park, the theme was: Let’s work together to make Garfield beautiful. On the afternoon of the following day, 21 June, Garfield Community Day concluded with an event that had two components. First, the Dedication of Dundee Dam River Walk, an elegant 4,900 foot pedestrian path above the Passaic River, from Kipp Avenue in the north to Outwater Lane in the south. Second, the unveiling of a full length and life-size statue of General Casimir Pułaski (1745-1779), which is located at the River Walk’s mid-point, at the tee intersection of River Road with Semel Avenue. 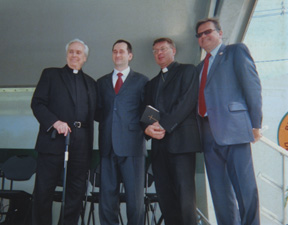 Garfield City Manager Tom Duch, who served as Master of Ceremonies at the Dedication and Unveiling, explained that fundraising for the Dundee Dam River Walk beautification project was a triumph over adversity for the “City of Champions”. Duch also mentioned that he and former Garfield Councilman Stanley Moskal decided to raise funds to erect a statue of General Pułaski in Garfield in a spirit of friendly competition with neighboring Wallington, NJ, whose long serving mayor Walter Wargacki organized the erection of a bust of General Pułaski near the Eighth Avenue Bridge. Mr. Brian Hanlon, whose wife is Polish, is the sculptor.

Garfield’s Mayor Joseph Delaney and Congressman Bill Pascrell delivered speeches that encouraged us to remember that we are all in the enterprise of building a better America together and Garfield is an exemplar of unity of purpose in a city that is remarkable for the diversity of its population. 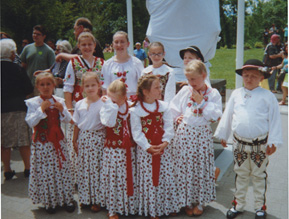 All of the speakers at the event agreed that freedom is the indispensable prerequisite for civic virtue. The life and legacy of Brigadier General Casimir Pułaski, the father of the United States cavalry, who fought for freedom against the pro-Russian faction in his homeland Poland, and then died, after he was mortally wounded at the Seige of Savannah, defending the American Revolution, reminds us to be ever vigilant in freedom’s defense. This is especially important to remember in the present political context marked by resurgent Russian imperialism and the Kremlin’s repeated violation of international laws and norms of civilized conduct.