This year marks the 100th anniversary of G.K. Chesterton’s reception into the Roman Catholic Church. Conversion was one of the most important events of Chesterton’s life. It was also significant in the life of the Church itself, giving Catholics cause for celebration and encouraging other people to consider taking the same step. In fact, one hundred years later, Chesterton is still helping men and women to become Catholics. In the words of Dale Ahlquist, one of the world’s leading Chestertonians and himself a Chesterton convert, “People who encounter his writings are drawn to his faith. They want what he has.”

In this online conference, Dermot Quinn and Dale Ahlquist will explore Chesterton’s conversion in its personal and historical context, exploring its meaning for him and for the Catholic world in general. What lessons can be drawn from it? How does it resonate today? Are we still living, in some sense, in the Age of Chesterton?” 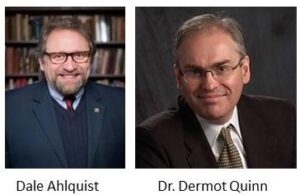 Dale Ahlquist is President of the Society of Gilbert Keith Chesterton, creator and host of the EWTN series “G.K. Chesterton: The Apostle of Common Sense,” and Publisher and Editor of Gilbert magazine. He is the author of six books and has edited fifteen. After helping start the first Chesterton Academy, a top-rated Catholic classical high school in Minnesota, fifteen years ago, he is now the head of the growing Chesterton Schools Network, which now includes over 50 high schools in five countries.

Dermot Quinn, D.Phil. is Professor of History at Seton Hall University and Editor of The Chesterton Review. He was educated at Trinity College, Dublin and New College, Oxford, where he was awarded a doctorate in 1986. He has written extensively on Chestertonian themes, has authored three books The Irish in New Jersey: Four Centuries of American Life (Rutgers University Press, 2004)(winner, New Jersey Studies Academic Alliance, Non-fiction Book of the Year, 2005); Patronage and Piety: The Politics of English Roman Catholicism, 1850-1900 (Stanford University Press/Macmillan, 1993) and Understanding Northern Ireland (Baseline Books, Manchester, UK, 1993 and many articles and reviews in the field of British and Irish history.

The G. K. Chesterton Institute for Faith & Culture is located at Seton Hall University, South Orange, N.J.  Founded in 1974 by Father Ian Boyd, C. S. B., its purpose is to promote the thought of G. K. Chesterton and his circle and more broadly, to explore the application of Chestertonian ideas in the contemporary world. The Institute’s work consists of conferences, lecture series, research, and writing. The Chesterton Review, founded in 1974, has been widely praised both for its scholarship and for the quality of its writing. The journal was founded by Father Ian Boyd, C. S. B., and is edited by Dr. Dermot Quinn, includes a wide range of articles not only on Chesterton himself, but on the issues close to his heart in the work of other writers and in the modern world. It has devoted special issues to C. S. Lewis, George Bernanos, Hilaire Belloc, Maurice Baring, Christopher Dawson, Cardinal Manning, the Modernist Crisis, J. R. R. Tolkien, Fantasy Literature, a Special Polish Issue, as well as recent special Croatian, Charles Dickens and Stanley L. Jaki issues. For information about the Institute or The Chesterton Review please contact Chesterton Institute and visit the Seton Hall Website.

The Society of Gilbert Keith Chesterton is a Catholic lay apostolate, recognized formally as a canonical private association of the Christian faithful. Our mission is to evangelize through education, inspiring people to live joyful, holy lives, with G.K. Chesterton as a model of lay spirituality. To help carry out its mission, the Society sponsors organizations including member schools in the Chesterton Schools Network and the missionary organization Teach for Christ. Visit our website.

We hope you will join us!